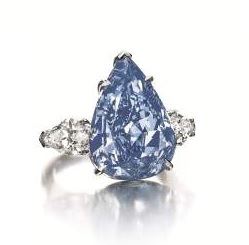 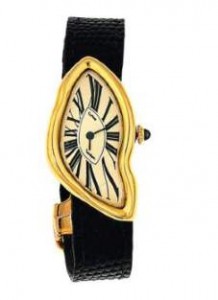 How did you get into the auction industry and how long have you been at Christies? Is it something you’ve always wanted to do?

I was in the right place at the right time. After reading Modern History at the University of Oxford and then teaching for two years my love of history drew me to the world of auction. An opportunity arose in the Jewellery department and here I am, 18½ years later, as Head of Department at Christie’s South Kensington where my role is to guide the department, react to market changes, liaise with international colleagues and as a result, ensure I give the best strategic advice to clients

What has been one of the most expensive pieces you have valued and auctioned?

The most expensive piece we sold at South Kensington last year in 2014 (pictured above) in our September Jewellery & Watches sale – an 18ct gold ‘Crash’ wristwatch by Cartier sold for £80,500 (including buyer’s premium).

What has been your favourite piece you have valued and auctioned?

After nearly 19 years at Christie’s, there is a wealth of examples to choose from. I think it would have to be a 19th century necklace consigned by a colleague that was part of a “walk in” valuation – the client came to the valuation counter at South Kensington and asked to show a specialist a necklace they owned. Of exceptional quality, the necklace was a rare example of Japanese inspired cloisonné enamel work by the artist Jeweller, Alexis Falize. Composed of five medallions, this jewel demonstrated the fine detail, vibrant colours, and varied animal motifs characteristic of his work, with each double sided medallion a work of art in its own right. With a pre-sale estimate of £25,000 to £30,000 the necklace achieved £115,250.

Can you name any celebrities that have bought pieces from you?

Do you get to meet the owners of the jewellery and hear about its history/stories? Does this help to sell the piece at auction?

An important part of owning an item of jewellery is the story behind it – when and where it was bought or given is part of what makes it special to the owner – but when a jewel has significant provenance this adds an additional element to its appeal. For example, in a South Kensington sale in November 2014 we sold an important early 19th century gold, hardstone and enamel parure formerly belonging to the wife of the personal physician to Joseph Bonaparte.

What steps do you take to value a piece? What do you look for?

The jewellery we see generally has an intrinsic value due the materials used, such as precious metals, diamonds and gems. As a specialist you are looking for signs of quality – fine workmanship and design are often an indicator of a notable jeweller, such as Cartier, Boucheron and Van Cleef & Arpels, to name a few.

Do you get to value pieces around the world or just in London?

I’m based in London and the majority of the jewellery I see is from the capital and surrounding counties. However, my travels also take me beyond these shores to help my international colleagues. We are a global team, with specialists in Asia, America and across Europe.

How big is the team that work specifically on Jewellery?

Christie’s jewellery department has specialists across the world: in New York and LA, Hong Kong, and across Europe in London, Geneva, Paris, Berlin, Rome, and Amsterdam. This makes it possible for a member of the team to visit clients, wherever they might be. In 2015, Christie’s Jewellery is celebrating 21 years as auction market leaders.

Do you have any big pieces up for auction in 2015 that we should watch out for?

The next jewellery auction at Christie’s South Kensington will be held on 4 March. The pre-sale viewing will be open from Saturday 28 February, and anyone is welcome to come and browse the sale or attend the auction. The sale will include jewels to cater for most tastes, from collectable antique jewels, through to signed contemporary pieces such as a fun pair of diamond and coloured diamond flower earrings by de Grisogono (estimate £8,000-£8,500), and a selection of Bulgari jewels. There is a stunning group of flower rings and earrings in the March sale, perfect for the Spring. 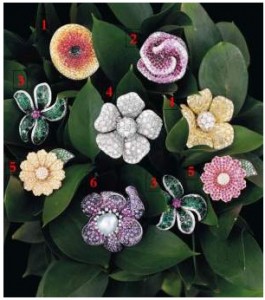